Hi! If you’re new here. Welcome to our free forex traders course. If you are here for the first time, check out the course overview to start at the beginning. If you’ve been here before. Welcome back!

Ask Us A Question

If anything is unclear. Our goal is to help you on the way to becoming successful traders and our authors are happy to help.

We highly recommend you to open a demo account early on in the course to slowly familiarize yourself with all concepts while not risking your own capital. Here’s a link to start practicing with our recommended forex broker.

So, you may have already seen some charts in the course so far. But I haven’t yet gone into exactly how to read them in detail.

This lesson we’ll cover candlesticks. More specifically, candlestick charts. In about 10 mins, we’ll have covered all the basics of how candlesticks work, how to read them and therefore how to understand the precise price action in forex charts.

They may only see like small red and green lines on a chart, but each one tells a longer story if you just pay closer attention.

And we definitely should be paying close attention if we want to become successful forex traders.

To express a candlestick as simply as possible:

Candlesticks are a type of chart that we use to simply display the high, low, opening and closing price of a given time period.

The length of time each candlestick covers depends on what you have your chart time frame set to. This will be the time it takes to form each candle.

For example, if you are looking at the ten minute chart, then each candle represents what the price did during those ten minutes.

Occasionally, you will hear them referred to as japanese sticks, due to the ideas origin in Japan in the 18th century to chart the price of rice.

And it is only since modern charting software that they have made a comeback. Now they are synonymous with almost any market as almost all market participants use candlesticks to display price action.

The Anatomy of a Candlestick

Each candle can and should be broken down into several small parts, each one giving us valuable information about what the price did in the time period the candle displays.

To explain, refer to the image below. 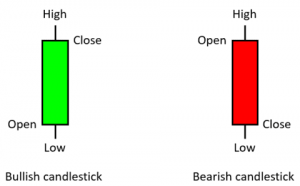 Every candle starts somewhere, this is what we call the open. This is the price where the previous candle closed and shows us the price at the beginning price of this new period of time.

This in contract is the price where the candlestick closed at the end of its period of time.

The body is the area youll find between the open and close inside the candle. This is also called the ‘real body’ of the candlestick.

Now in the image above you’ll see two candlesticks, one green bullish candle, and one red bearish candle. (Sometimes bullish is white and bearish is black).

If the open is above the close, that shows that the price went down during the period of time that the candle was formed. We are left with a bearish (red) candle.

If the close is above the open, that shows that the price went up during the period of time time that the candle was formed. We are left with a bullish (green) candle.

The Wicks and Shadows (Highs and Lows)

Also as you can see in the image above, there are two further lines on the top and bottom of the candlestick. This shows the high and low point of each candle. These are commonly referred to as the wicks or shadows of the candle.

They display the maximum and minimum peaks of the price action during that period of time.

Using the information we can deduct from each candlestick, we can often make a couple of assumptions on what the price action did over time and the relevant market sentiment.

There are many ways one could approach this, but the simplest and most effective is just considering the length of the body of the candle and its color.

At its most basic level, if the candle is green, the price went up, if red, it went down. And the longer the candle, the bigger the price increase if bullish, or decrease if bearish.

Bearish candles show when the price is going down.

If the candle has a red (or black) body, the price has gone down across the candles time period.

As with the candle bodies, the highs and lows give is useful information, especially regarding the current market volatility.

For example, if there is a large wick on the top of a candle we usually consider this a bearish sign as we interpret a price rejection and a volatile movement of the market both up and then down during a short period of time.

The wick illustrates that the price has gone up to its peak within the candles time period, and since the candle closed at a much lower price (hence the long wick) we assume a strong price rejection, thus the bearish market sentiment.

The same is true in the opposite scenario with long wicks below the candles. And the longer the wick, the stronger the rejection is.

Short wicks are quite regular and show us the market is fairly stable at that price point over the certain period of time. You’ll find this most often and your trading strategies will then likely come from larger indicators such as trend lines, support or resistance lines, or some more fundamental analysis you’ve made.

It’s pretty simple to understand, just make sure you are 100% clear on how a candlestick is constructed before moving further, then the rest of this lesson will be a breeze.

A good tip is to have each of these more unique candlestick formations with you on a cheat sheet so you can quickly make conclusions based on what you are seeing in the markets, until this becomes second nature of course.

A Marubozu candlestick is a candlestick that had no visible shadows or wicks (or highs or lows), All you can see is the real body of the candle.

This means that the price opened at one point and then continually moved in the same direction until its close, as well as closing at the lowest/highest point that it reached.

Therefore, there has been very little volatility in this timeframe, showing no resistance or support against the price moving up or down.

Therefore, a green Marubozu is a very bullish signal as it means the buyers has control during the entire formation of the candle. Thereby constantly pushing the price up without any bounce back.

Likewise, a red Marubozu is a very bearish signal, for he same reason, just vice versa.

A Doji candlestick is easy to spot as it looks like a cross sign, or some variation of it.

A Doji is formed when the candle has the exact same opening and closing price, meaning the real body of the candle is a line.

However, unlike the Marubozu, a Doji is likely to have shadows and wicks as the price has tried to move up and/or down but has then returned to the same point where it opened.

If you see a doji, you can interpret indecisiveness in the market. The price has not moved and signals a certain agreement between the buyers and sellers.

It is then quite smart to consider the candles just before and after the Doji as they can help indicate and give insight into where the market is moving next.

So, if a Doji is formed at the top of an uptrend, or several green candles, thes we find what we call ‘buyer exhaustion’. This means there are fewer buyers left at this price and could likely signify a reversal in the market sentiment.

The same, albeit vice versa can be said of a downtrend reversal.

A spinning top is very similar to the Doji and can be interpreted quite similarly. They are created when we see long wicks and shadows but with a small real body.

This, as with the doji, signifies a slowdown in the market during the trend as either buyers or sellers are reaching exhaustion and the market is happy at that current price, or is ready for a reversal. We can also say that neither the buyers nor the sellers have gotten hold of the market during this period.\

In the next chapter, we will cover advanced technical analysis so you can begin to become an expert chart reader. We will be kicking things off with the Top down & bottom up analysis approaches.

Previous Lesson
Support & Resistance
Next Lesson
Top Down & Bottom Up

Open a free demo account with our recommended broker

If you haven’t already, we highly recommend you open up a demo account while going through this course to familiarize yourself with everything to really take the maximum from the course.